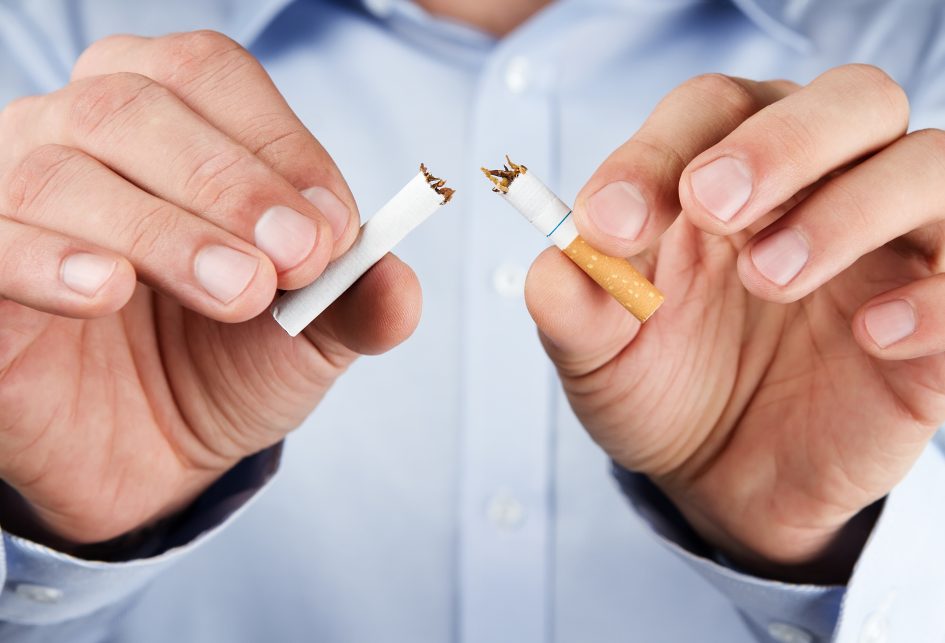 I THOUGHT you looked older than your age.

This is the old wry twist on the exhortation of pregnant women to remember they’re eating for two. “Eating for two” is a reminder to the expectant mother that she is now making tectonic choices — about what she puts or doesn’t put into her body — that will affect an innocent, vulnerable second party for its entire lifetime.

In Australia, the caption “Don’t forget, you’re smoking for two now” might be accompanied by photos of mother and fetus with corresponding hypopharyngeal tongue cancer, emphysemic lung tissue or gangrenous feet.

Australia Ahead of Its Time

Too gross? OK, we’ll just focus on the mother (and anyone else who smokes). But as of 2012, Australia has not only gone big on graphic effects-of-tobacco-use photos in ads to discourage smoking, they’ve mandated these images be placed on every pack of cancer sticks sold. Australia is at the vanguard of finally out-messaging the previously all-powerful tobacco lobby, and we can only hope other countries follow. With the World Health Organization’s blessing, many governments are considering it.

Australia passed the world’s first so-called plain-packaging regulations in 2011 and implemented them the following year. By law, the government established a collection of 14 rotating images that must be used on all cigarette packages. These images include the aforementioned tongue cancer, blackened lung and foot with gangrene, as well as “a toilet stained with bloody urine and a skeletal man named Bryan who is dying of lung cancer.” This material must cover 75 percent of the package’s face. Trademarks, decorative styling, embossing and any other unique design are banned. To add insult to opprobrium, more ferocious warnings must be posted on the package sides and overlay 90 percent of the back — not one percentage point less.

The bottom quarter of front-of-package real estate is reserved for the product name in uniform Lucida Sans font against a color fill — also legally decreed — of “drab dark brown” Pantone 448C. (The government originally characterized the backdrop color as “olive green” until the Australian Olive Association complained that it gave their product a bad name.) Over the diligent course of seven studies comprising 1,000 smokers, researchers concluded that Pantone 448C had the lowest appeal and implied the lowest quality and maximum harm in a cigarette. Survey participants commonly described this color as “‘death,’ ‘dirty’ or ‘tar’ without any positive adjectives.”

So — you’re still smoking? What’s it gonna take? A selfie of you in a Pantone 448C-colored coffin emblazoned on your favorite brand of smokes? In 1965 — a year after then-Surgeon General Dr. Luther Terry averred that smoking causes cancer and, most likely, heart disease — 42 percent of Americans, including the good doctor, smoked cigarettes. A 50-year messaging war has been waged since then between Mad Men-style marketing geniuses (backed up by big-tobacco law firms) and U.S. government regulators. The government was initially near-impotent in trying to fight this war, but over the past half-century it has made great progress. Ultimately, we’ve learned habitual smoking (“Is there another kind?” — thanks to Col. Nathan R. Jessup aka Jack Nicholson) severely harms most bodily systems and causes numerous torturous diseases. And the smoking rate for Americans fell to 15 percent by 2015.

But why isn’t that rate at zero? Sure, it’s extremely painful to quit smoking. So is a root canal, but you do it to save your tooth (which is a far cry from your life). The drop in the smoking rate over the past two or three generations has occurred largely through convincing young people not to start. And that’s where Australia is trying to make real gains. The actual cigarette pack has been the last bastion of advertising potential for tobacco companies. They were kicked off of television, radio and billboards. They’re all but eliminated from magazine, newspaper and internet ads. But they were still able to draw your attention with their flashy packaging — at least until December 2012 in Australia.

And May 2016 in the U.K., Ireland and France. Based upon legislative enlightenment and progress in Australia, these governments have followed Oz and found the courage to stand up to Big Tobacco. They call it “standardised” cigarette packaging, and the percentage of the pack devoted to images and warnings is slightly less. But the theme is the same: force smokers to view and actually think about the real, obscene effects of smoking on the human body.

Do Australia’s gross-out cigarette packaging laws work? Not surprisingly, tobacco companies say no. The data is still being gathered, but most signs point to a modest yes, with strong potential for expanded effectiveness. In 2015 a series of comprehensive studies was published. It found that standardised packaging reduced the allure of cigarettes, encouraged smokers to quit, and more effectively emphasized the health warnings. In the three years after plain-packaging laws were implemented, it’s estimated they accounted for a quarter of Australia’s 2.2 percent drop in smoking from the three-year period before. (The remainder of the drop was attributed to increased tobacco taxes, other advertising bans and smoking area restrictions.)

So far, public smoking aversion therapy has had moderate but significant positive effects. Since plain-packaging laws are still in their infancy, public health professionals are optimistic about future increased efficacy, especially in preventing young people from ever lighting up that first fag. Clearly, the small, unobtrusive warnings on U.S. cigarette packages do not get the attention that graphic images and messages covering most of a pack do. Maybe Congress will grow a backbone. Until then, it remains invertebrate — unable and unwilling to stand up to American tobacco lobby money.

For those motivated quitters in the states who need a little more impetus, start your collection of voluntary cigarette package cozies today. Get a jump on the U.S. government and collect all 14 in the Greatest Hits series of headlines and photos, including such timeless classics as “Smoking Causes Lung Cancer,” “Smoking Causes Peripheral Vascular Disease,” “Smoking Damages Your Gums and Teeth,” “Smoking Harms Unborn Babies” and many more.

Whether you’re smoking for one or two, the time to quit is now. Help is available.

And if nothing else matters: smoking makes you look older than you are.