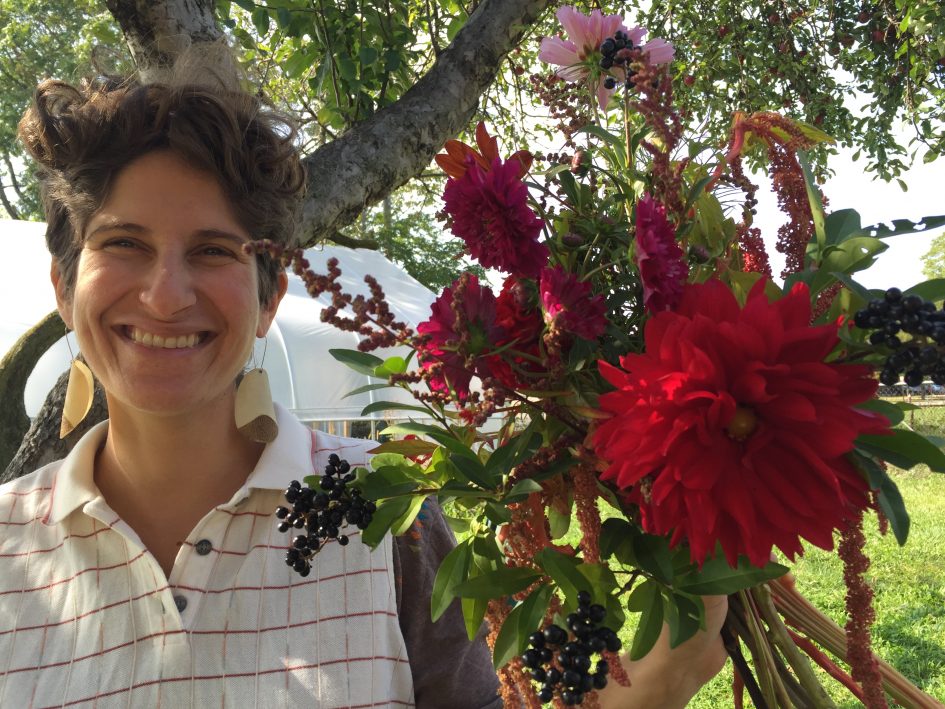 “We can offer a different type of romance, a unique product based on solely local flowers.”

In the heart of Detroit, a not-so-secret garden sprouts sustainably grown seasonal flora to provide the local community with living beauty. Sarah Pappas, founder of Fresh Cut Detroit and Hartford, Connecticut, native, has a serious green thumb and a passion for the natural world. Pappas has created a sustainable life and business for her family in the midst of Michigan’s largest city, adding herself to the ever-growing list of up-and-coming urban farmers.

At the end of 2010, Pappas moved to Detroit from Poughkeepsie, New York, after working with the Hudson Valley land for four years at the Poughkeepsie Farm Project, a ten-acre, 400-member CSA (community supported agriculture) organization.

“I liked that style of farming, and I thought maybe it was for me. But I was also really interested in urban agriculture, and an opportunity came up to work for The Greening of Detroit to manage a couple of their farm sites and to teach an urban agriculture apprenticeship program. So I decided to give it a try,” Pappas reminisced of her move from New York to Michigan.

Fresh Cut was founded in 2013, but before that, Pappas continued to shape her impressive résumé by working in various urban settings within Detroit. After a few years working with The Greening of Detroit and Keep Growing Detroit, Pappas became interested in and devoted to breaking ground on her own land. Vision became reality when Pappas purchased a home in Woodbridge, complete with about a ¼ acre of land that would eventually become the farm space for Fresh Cut Detroit. While a small growing space is a given for urban farming, Pappas is skilled at putting every inch of her property to good use.

“You can make a good profit on a small amount of land, so I think there are valuable crops for urban growers. I’ve been actively encouraging other growers in my community to include cut flowers in their farm and collaborate to strengthen the offerings of Detroit grown flowers,” said Pappas.

The growing season for Fresh Cut Detroit begins slowly, between the months of March and April, as Michigan warms and shakes off her winter cold. The core of the season stretches from May until late October, during which the public is welcome to stop by for a visit.

“After getting to know the urban agriculture landscape in Detroit, it seemed to me that cut flowers were an opening and nobody local was specializing,” said Pappas of the Fresh Cut Detroit beginnings. “I was also watching the local flower trend follow behind the food trend all around the country, and so it seemed like a good bet in terms of where consumer interest was at.”

Fresh Cut Detroit is a small family farm. Pappas’ young son is with her a few days a week as she works on the farm.

“I’m just trying to balance it,” said Pappas. “It feels so good to me that people are excited about the farm and interested in it. It’s a small operation and we value neighborliness, we value flexibility and we just really love what we do. I feel really grateful that we’ve had so many lovely, flexible customers … excited about the mix we bring. [For example, they wouldn’t say], ‘We need 10 dozen of this exact color on this exact date,’ because that’s not the way we work. It’s not like ordering off a menu at a wholesaler. It’s a different way of interacting with the flowers. And for the people it works for, it really works.”

This time of year, Pappas’ favorite flower she grows is the Japanese anemone. “It’s a perennial and it has a beautiful, really simple flower. It’s an aggressive plant, so once you get it started, it just takes care of itself. It has a springtime look to the bloom but it comes in the fall.”

For those wanting a taste of what Fresh Cut Detroit provides, Pappas offers a weekly bouquet service to the local community from May through early October. Participants can either come to the farm to pick up their bouquets or, if they live within five miles, a home delivery option is available.

“Everything I sell and grow is local,” said Pappas. “Each week the arranged look is totally different and could only have been made that week. That’s a big part of what makes my work special. It’s completely in this place and in this time.”

“I think what I do is important to my customers because it helps them to maintain a connection with the natural world and encourages them to look twice at flower growth on the side of the road. It helps my customers interact [with] and see the beauty around them more… I think that’s really valuable,” said Pappas.

Pappas has been working in agriculture-related justice for over ten years and is ardent about buying and growing locally.

“People should know that many of the same concerns with the international food system that have led to farmers markets are also true with cut flowers. Worker health standards are often not as strict, particularly in South America – where 75 percent of the flowers sold in the U.S. come from. By buying American grown flowers, [those consumers] are contributing to farms that have stricter labor standards and environmental standards,” said Pappas, who received her Certificate in Agroecology and Sustainable Food Systems from the University of California, Santa Cruz.

“Cut flower farms, like mine, are extremely diverse and they provide food and forage for positive insects like bees, parasitic wasps and other types of pollinators – insects that are important to our ecology,” Pappas said. “The flowers that [consumers of local farms] buy are going to be fresher, rather than being shipped halfway across the world. The flowers are still going to have fragrance, there will be more varieties available locally, from my farm, than [consumers] can get from an international marketplace. While I don’t offer the same tropicals grown in California, I do offer many really beautiful perennials that only bloom for a week or two at a time during the season.”

What’s Next for Fresh Cut Detroit?

Pappas isn’t interested in fast-tracking her business, but rather in continuing to build steadily, like the Michigan growing season. In 2017, Pappas plans to focus on increasing the beauty and productivity of her existing farm. She also has several different varieties of alliums and beautiful double tulips which will make their way into the world in the spring of next year. For now, sustainability is at the forefront of Pappas’ business.

“We’re going to be installing a rain water catching system to diminish our use of municipal water and to increase the efficiency of our watering system. I’m really excited about that because it’s an important step in sustainability — ecologically and economically. We’re going to continue investing in beautiful perennials, waiting for them to get established so in the years to come, they’ll be bountiful. This year we’re experimenting with at least a dozen type of crops we haven’t grown before. We’ve really bulked up the bulbs for the springtime; the spring is really going to be exciting.”

Success means something different to everybody. For some it’s fame and fortune; for others it’s something of a humbler nature. “I just want to be a resource for the community. I’ve fantasized about Fresh Cut sponsoring a Little League team,” Pappas gushed. “I’m excited for the day when we’re stable enough that we can support really wonderful existing institutions like a Little League team. It’s definitely a dream of mine to sponsor some type of local youth sports team.”

Please note: All images are courtesy of Fresh Cut Detroit.