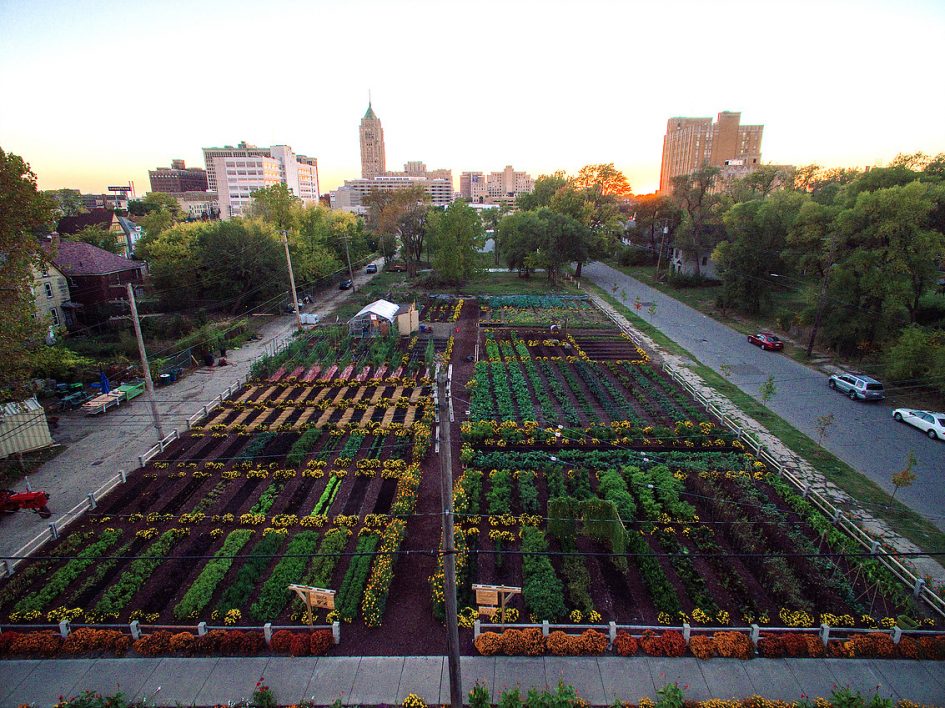 When you think of a city – an urban jungle filled with concrete, traffic and all walks of life – chances are farming isn’t the first thing that comes to mind. Yet the Michigan Urban Farming Initiative is positioning itself as the leading force for urban agriculture within the Detroit community. MUFI is a 100-percent volunteer-run nonprofit based in Detroit’s North End, with their headquartered space located just off of Brush Street.

MUFI was founded in 2012 by Tyson Gersh and Darin McLeskey, both former students at the University of Michigan who were researching urban agriculture. The two met at a Detroit Partnership meeting and found they were interested in how urban cities work and were fascinated by what people were doing with real estate in Detroit to better communities. They participated in a number of grant programs to receive the initial funding and founded the Michigan Urban Farming Initiative thereafter. The original idea for the farm was to have it reside on a small piece of land about the size of a backyard. Today, however, MUFI runs a 1 ½-acre area of land (about the size of one city block), which helps feed the local community for most of the year.

Melissa Shiner, the volunteer coordinator for MUFI and a psychology student at the University of Michigan, is doing everything in her power to grow with both the land and the city. She originally connected with MUFI through a social innovation organization at the University of Michigan. Once she learned more about MUFI, Shiner realized how invested and passionate about the urban farming project she was.

“I’d better give it a go and see how it is,” said Shiner of her first-year experience working with MUFI. She worked 40 to 50 hours per week on average and often continued to work at home afterhours. “I’m really passionate about the city of Detroit. I’ve always wanted to make an impact so it was really awesome when I met a group of people who are similarly invested and have passions similar to mine.”

The growing season for the outdoor farm runs from March – when there is no longer any frost – to the end of November or December, depending on how early Michigan winter comes. MUFI also has an indoor space where they can grow into January to keep providing for the community, even in the bitterest of winter weather. Shiner says some of the most popular produce on the farm are collard greens, okra, tomatoes, hot and sweet peppers, and even a variety of exotic produce.

The goal of the Michigan Urban Farming Initiative staff is to gather and harvest as long as the weather allows, then work in properties around the area doing demolition and reconstruction. “Something I think that is really powerful, that the Michigan Urban Farming Initiative does, is trying to establish a community. It’s not like we’re trying to displace anyone or change anything that’s already there. It’s more so that we’re trying to pad in places where there are gaps. A prime example would be food disparity in the area.”

Many neighbors who participate in MUFI end up freezing their produce from the farm during the winter because they don’t necessarily have access to free produce during colder months. MUFI runs a pay-what-you-can system. Neighbors can donate money in exchange for their food if they choose, but it isn’t expected by the organization. MUFI also has a farmer’s market every Saturday from 10 a.m. to 4 p.m., which is when neighbors can select the harvest they want.

Shiner, like her colleagues, is passionate about what she does at MUFI. “I think what we’re doing is important for a variety of reasons. The main reason is obviously the health benefits for the community. But also, I think there’s empowerment that comes from an investment in a community. And I’ve seen it personally – how neighbors respond to us coming in and working with them on the farm and supplying them with fresh food they need. [Another reason] is the beautification of the neighborhood, because these are areas that are generally pretty blighted,” said Shiner. “I think one of the greatest things is to see people really happy that their neighborhood is being invested in. In many situations, the land is taken by land developers, then the land isn’t used and it just sits there. And that’s not helping anybody.”

MUFI has ambitious plans for the future – from implementing a shipping container building where a student intern can live on-site, to creating a community resource center and installing a retention pond. Sometime in the near future, MUFI would like to begin selling their products to the general public as well.

“We’re always looking for numerous ways to not only support the nonprofit but also the surrounding community. It would be awesome for the nonprofit to make something like pesto and sell it so we can have some steady flow of income because right now, we really just rely on donations and grants.”

If you’re interested in getting involved, learning more and lending some of your time to MUFI, all you need to do is show up on any Saturday, year-round, between 10 a.m. and 4 p.m. The Michigan Urban Farming Initiative supplies the tools, just be sure to bring your own water to drink, and dress for the weather.

“In just one Saturday, you can make a big impact,” said Shiner, “and I think that’s one of the best parts about volunteering. The best thing anybody can do [to help us] is volunteer because running a 1 ½-acre farm between two people is pretty difficult.”

Please note: All images used within this article are courtesy of The Michigan Urban Farming Initiative.