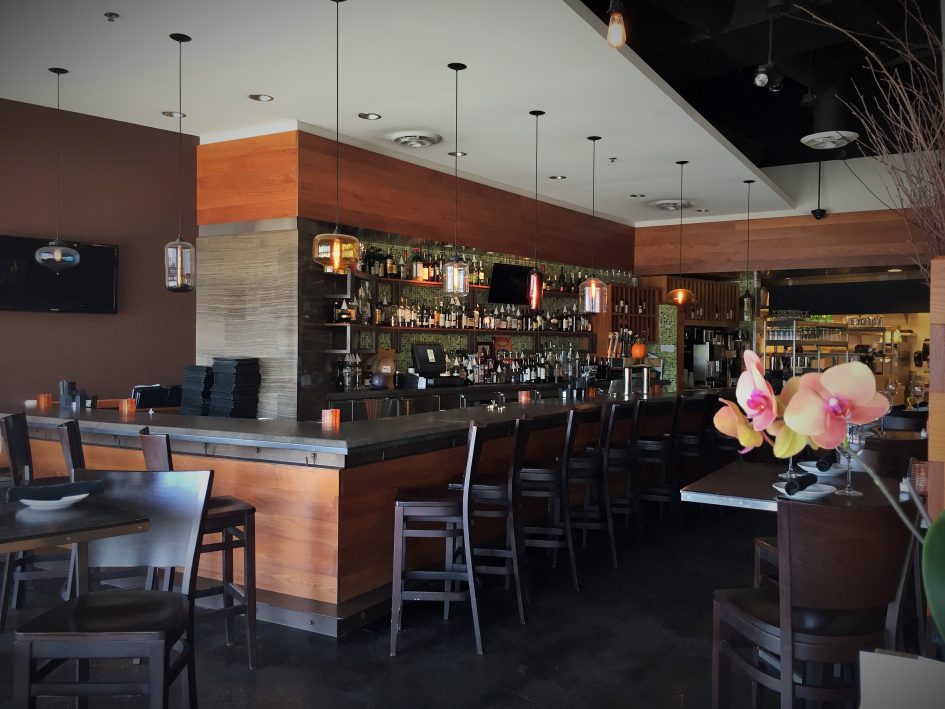 “We like to say around here that ‘delicious is the only rule,’” said Nick Rodgers, executive chef at The Root Restaurant & Bar. “As long as it’s delicious, it’s allowed.” It was 12:30 p.m. and he was seated at the bar, apron-clad and dressed in the classic kitchen uniform of all white, with a steaming cup of coffee in hand. He’d politely asked me if I wanted some when I arrived.

“It’s really good!” he assured me. While it smelled enticing, I declined. Taking a chef from his kitchen meant we had limited time, and I wanted to get to the root of The Root.

Rodgers didn’t always know he wanted to be a chef; he originally wanted to be a teacher. Now, as head chef at The Root Restaurant & Bar, he gets to create unique dishes while schooling fellow staff in the art of creating quality cuisine.

Rodgers was born in Santa Ana, California, and moved to Howell, Michigan at just five years old, where he has lived for the past 20 years. “I actually went to Western Michigan University to be a teacher,” said Rodgers. “But I cooked my way through college. I grew up cooking at home and I always enjoyed being in the restaurant industry. It was something I did for extra money as a kid. But I grew a real love for it – being in the restaurant with the action, the people and the environment. So I left college and was like, ‘I’m going to pursue being a chef full-time.’”

The idea for The Root came about during brainstorming sessions between Rodgers and his childhood friend James Rigato, who is now the executive chef at The Root’s sister restaurant, Mabel Gray, in Hazel Park. The duo met at summer camp when they were 10-year-olds, and they grew up together. They attended the same high school. They both discovered they had an interest in the culinary arts, so they experimented with different dishes and worked together catering various events. The friends opened The Root in 2011; it had been a dream of theirs for years. When The Root first opened its doors, Rigato was the executive chef and Rodgers was the sous chef. “Through our friendship, through cooking, working together [in various restaurants] in Metro Detroit – everything we wanted in the dining scene, we put into The Root,” Rodgers reminisced.  “The Root was designed to get to the root of fine dining, essentially. To strip away all [the extra stuff], the tablecloths and linens, and just offer high quality service, ingredients and food.”

The Root is located in an ordinary strip mall in White Lake, Michigan. To the unsuspecting patron, the restaurant is a foodie oasis. Rodgers enjoys working in White Lake because it gives him the opportunity to help educate the community about the misconceptions around dining out and eating local food. He commutes 20 miles to work each day from Howell. “[Working in White Lake] puts me in touch with how to feed people; how to approach food; how to write menus; how to make delicious, fresh local food. Some people think dining out is over their knowledge or their ability or is really expensive. So working [in White Lake] influenced me to help a community I love to be around, to eat better and provide some sort of food culture that’s lacking.”

Locality and Sustainability Is at the Root of The Root

The majority of produce and meat at The Root is sourced locally from Michigan farms. The Root even hosts a CSA (community supported agriculture) pickup once per week for the local community at their location. “I work with a lot of farms. I personally [buy] from a CSA farm,” said Rodgers. “All of The Root’s seasonal stuff is from a CSA [farm]. All of our meat is local – all of our beef, chicken, pork. All of our lamb and rabbit that comes through the door is all local. Our butter is local. The localness is tremendous.”

If asked, Rodgers would say The Root makes the best bacon he’s ever had. “Not because I have any special tricks – there’s no secrets. It’s just a basic cure and a basic smoke. But the pork bellies are so incredibly high quality because they are local. They’re not overly fat, like commercial pork would be.”

“Buying local is super important for a lot of reasons. I’d say starting at the most basic level, it’s important from a food aspect. You should know your farmers; you should get to know where your food comes from,” Rodgers said. “Howell has a cool farmers market I go to on Sundays during the season. Going to farmers markets is also a good way to get to know your farmers. Locality is super important for the obvious reasons we all know – the distance and traveling of food, the environmental impact of such foods, driving in trucks or airplanes across the country, across the world. You also have a better product 99 percent of the time, certainly in produce and meat.”

Rodgers thinks the economics of buying local are also significant. “It provides jobs for people. That is super important on a grand macro scale. If you don’t buy from local farmers, then you’re stuck buying from a supermarket. It’s important to support your community as a whole. We have a lot of community art in the restaurant as well, from local Michigan artists. The tables and chairs are all local. It goes beyond food when you’re supporting the local community as a whole. Those people are your patrons. Their cousins, brothers and sisters are your patrons. It goes back and forth. I buy from them, they buy from me.”

The Root is so devoted to the locality of their food that they decided to feed the animals – those that provide meat for the restaurant – food scraps from their kitchen to help cut down on food waste while simultaneously feeding them quality food to prime them for the restaurant. The first year they had pigs; last year they had goats. “It was a great thing for the pigs; the goats didn’t eat too much. We saved 15 to 20 gallons of food waste every week, then it was shipped to our pigs at the CSA farm in Dexter. That worked for a whole year. They ate fish skin, broccoli stems – we fed them very little grain. It was a year of constant food scraps. And then those pigs came back.”

The Root is also dedicated to recycling as much as possible and is partnered with a recycling facility in Royal Oak.

A Shifting Menu to Compliment the Midwestern Seasons

With the fluctuating menu, Rodgers’ favorite dishes change, too. Currently, his favorite meal on the menu at The Root is tikka masala. “It’s super hard-spiced: cinnamon, clove, cardamom. It’s a confit – fried leg and thigh in a yogurt marinade with a grilled breast.” The dish is served over rye berries with homemade naan bread.

Rodgers even has vegan items on the menu to meet the needs of all his patrons. The Root currently has a vegan puttanesca available. “We have always had vegan menu options and have always had a vegan tasting menu as well. I think vegan food gets a bad name sometimes. I find a lot of times I accidentally make vegan food without realizing it. I eat a ton of vegetables in my life – like a lot of vegetables,” Rodgers smiled. “I think a lot of people who come in and eat from the vegan tasting menu are definitely not full-time vegans. I’ve got a vegan butternut squash, cider and maple syrup soup. People are like knocking down my doors for it — vegans and non-vegans.”

Healthy food is difficult to define because it really means something different to everybody. To Rodgers, it means eating a variety of honest food. “I think balance and freshness are the most important things in diet. I eat what I would consider really clean — only fresh foods, nothing [highly] processed. I don’t have anything frozen at home. But I do eat all foods of the world.”

“I think most of the food at The Root is healthy, even what people would consider a not-healthy dish — like our burger, [which] is grass-fed beef, 95 percent lean. So in the world of burgers it’s a pretty healthy burger,” said Rodgers. “We make our own french fries, so we cut our own potatoes, we blanch them. We make everything as healthy as possible. I try to think of it in my mind like, ‘What do I want to eat?’ I don’t shy away from butter or dairy. I do a lot of whole grains – rye berries and wheat berries, Farro, quinoa, a lot of complex carbohydrates. Overall, the food at The Root is very healthy. Even our bologna sandwich: the bologna is all beef and locally raised. It’s definitely food conscious. I don’t put garbage on the menu like white rice. That’s just senseless.”

Quality Fare for a Moderate Price

For the quality of food The Root offers, the menu prices are noticeably low. “Some chefs cook the food they want to eat, and some chefs cook the food they dream about. I like to run the restaurant as if I was a patron or a customer. I live in Middle America, I make a median income and have a family, so I gear the restaurant towards, ‘What is the best possible food I can make from my own demographic?’ I try to keep things as reasonably priced as others,” Rodgers explains. “The Root is really about inclusivity. Price is super important.”

The life of an executive chef is not always easy. Rodgers is at The Root every day of the week except Monday. But he truly adores what he does. It’s visible in the way he gets excited when asked what he loves most about working at The Root. “I have a super crew. A few of us have been here from day one. A lot of other people have been here for years. This is really my temple away from home,” said Rodgers, “There’s basically three places I have in my life: home, The Root and the gym. That’s pretty much my triangulation of life, and that’s it, and most of that time is spent here. So it’s really about comradery. I generally hire people I like. I can always train people to do whatever skill, but quality people are more difficult to find.”

When the Kitchen Becomes the Classroom

Of course, one of Rodgers favorite aspects of his career choice is the chance to guide others. “I always think the ultimate goal [of The Root] is an educational goal – not only with culinary professionals, bar tending professionals, serving professionals – with the community the education is super important. The education of the public is always a continued effort of The Root,” Rodgers said. “I think we are doing really important work at The Root. We are six years old now, so I think we’ve really helped create a blueprint for how local restaurants should be run. [The Root] is a great learning facility for cooks as well. I bring a lot of students in that go on to do great things. My sous chefs are all students or former students. I get to come back to being that teacher again; it kind of comes full circle. Teaching is a big part of my day. I really love that part. I get to do both, really. The freedom is amazing. Not a lot of chefs get that freedom. I’m very blessed to be in such a place that I have that opportunity.”

In the future, Rodgers envisions The Root with a rooftop garden, “so we can do hyperlocal stuff, where I’m just cutting my own herbs and tomatoes,” said Rodgers. “That would be next level Root: backyard-garden local.”